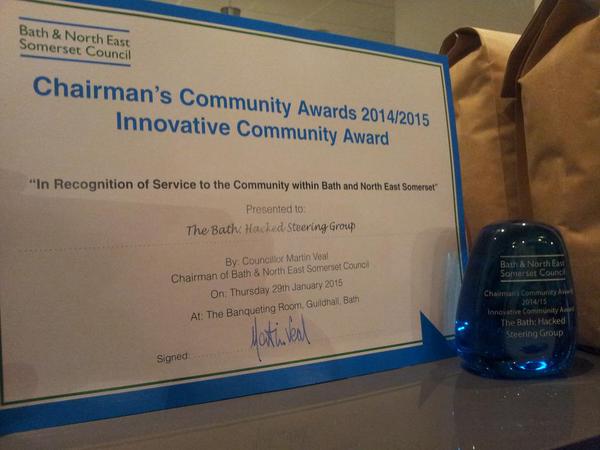 On Thursday 29 January Bath:Hacked was awarded an innovative community award  by the Chairman of the Council and we’re very chuffed.

According to the nomination form:

To a lot of people “data” means little more than rows and columns of numbers and text; strange, impenetrable computer files that are an increasingly common part of everyday life. It takes a lot of work to make them relevant and interesting to people who aren’t paid to look at them for a living.

The Bath:Hacked group ran events with local IT specialists to make things with technology (web-sites, phone “apps” and other good ideas), these “hacks” have been happening for just under twelve months and already have started using technology to make big changes to the local area:

This work has been driven by the energy and enthusiasm of the local population, and any community is defined by the sum of its parts; so far over 145 local residents (and a few council employees) have given up a huge amount of time to be involved.

Working with data is at best a niche occupation, but this group has taken the idea of “doing good” and done so in a way that benefits the local area, its communities, businesses and the Council without seeking publicity or looking for glory; it would be great to say thanks!

Huge thanks to everyone involved, it’s been an incredible team effort and we can’t wait to work with you all in the future!