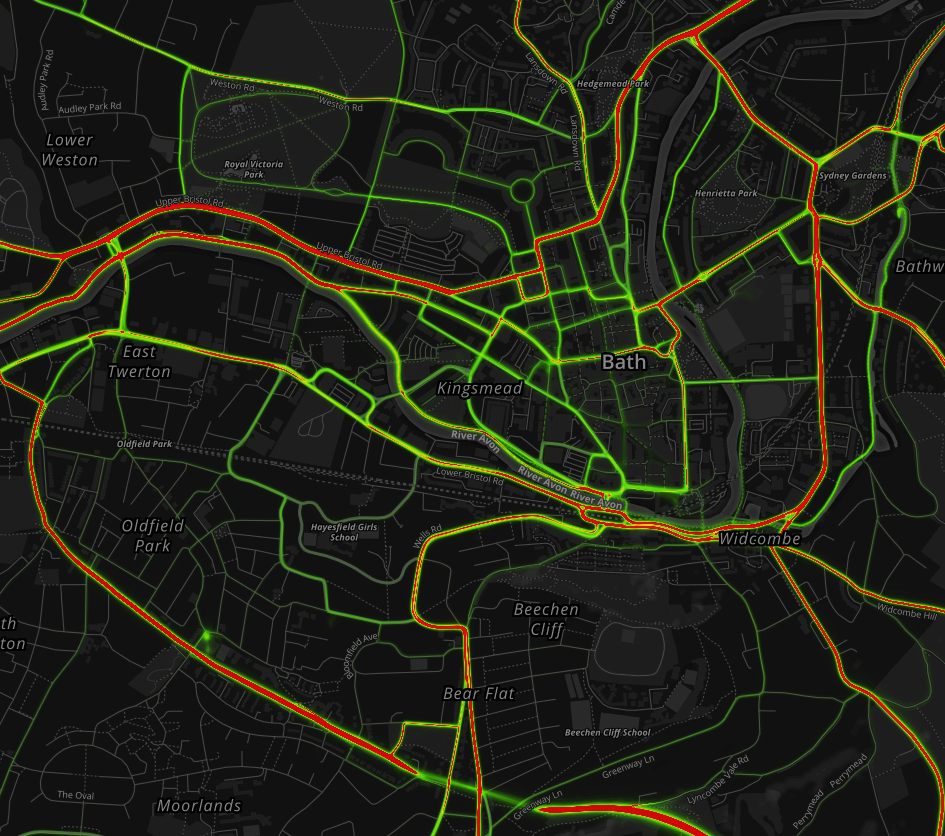 As part of our project exploring the Strava Metro data for Bath the first thing we wanted to do was to understand the data at a high level. By taking a step back from the detail we can start to understand what types of insights we can draw from the data.

The first and most important thing to note is the coverage. The extract we’ve been given includes one years worth of activities, starting from 1st January 2015 and ending on 31st December 2015. The data extract summarises activities that were started in Bath during that period, but doesn’t provide any information on the rest of Bath & North East Somerset or the wider local cycle network.

The data also, obviously, only provides information about activities that were publicly logged by Strava users during that period and within that location. A key question for interpreting the data will be: how representative of all local cyclists are the Strava community in Bath?

The Strava Metro FAQ has this to say about how representative the data might be:

“The Strava community is made up of all types of cyclists and surveys have shown that most Strava cyclists do not refer to themselves as competitive.  In fact, nearly one-half of all rides on Strava in denser metro areas are commutes so Strava Metro data gives great insight into the needs of those riding for transportation only. Furthermore, in metro areas, nearly everyone is a commuter – either commuting to work, or commuting to the ride they’ll be doing outside the city. Through our own analysis of the data, it is evident that cyclists of all types tend to use the same “best available” roads and paths while cycling in metro areas.”

It’s also important to note that while there is a summary of the demographics of the Strava users in the data, these details are not included in the underlying activity data. So we can’t identify activities recorded by a particular demographic. This is likely because of the chance of leaking personal information.

What types of questions can we ask?

Understanding the coverage, scope and content of the data we now have a better idea of how it can be used.

From what we know so far, we can expect it to help us ask questions such as:

But the data won’t be able to help us answer questions like:

For that we’d need additional data from Strava or other sources.

To help us confirm that the data is representative we would ideally compare the demographics of Strava users against the wider population of cyclists in the area. Unfortunately the only demographically comparable data available is from the 2011 census, which gathered some statistics about people who said that they commuted by bicycle.

The following graph shows a comparison between the Strava demographic file in our dataset and the 2011 census demographics:

At a proportional level there is a reasonably good fit between the age of users across both sexes. This suggests that the Strava data may be best suited for understanding how regular, heavy-use cyclists are using the transport network around the city. What we don’t have is any comparative demographic data for other categories of cyclist. So we need to take care when making assumptions about other types of usage, e.g. recreational or utility rides.

In the next post we’ll be looking at the profile of cycling activities by time of day, week and season. As ever, we’re interested in your thoughts, so please add a comment if you have any questions or ideas.