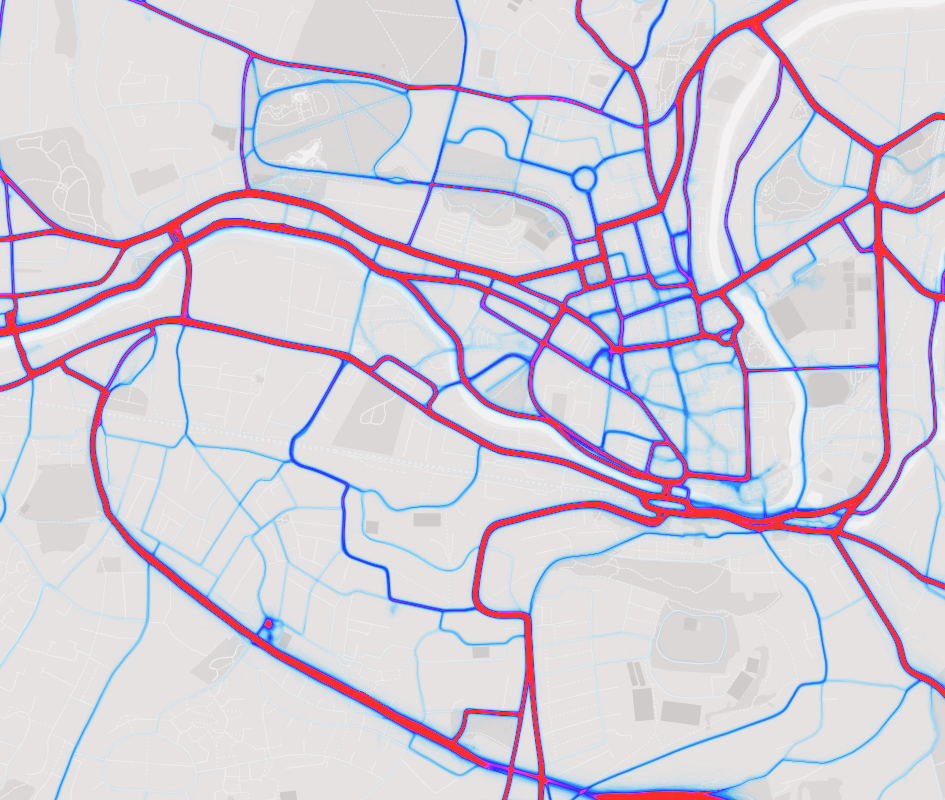 This is a screen cap from the Strava heatmap. Read on for our work

Yesterday we looked at some maps of the Strava Metro data for Bath. Different types of visualisations can help bring out different aspects of a dataset. So today in our attempt to find useful ways to explore the data, we’ve produced some animated maps.

Completing the first phase of our exploration of the Strava Metro data for Bath we’ve produced some short videos that try to visualise both the spatial and time dimensions of the data.

Tip: some of the videos are quite short. You can use the YouTube controls to pause, rewind and skip to particular points. Also, in the settings menu (the cog icon) you can change the playback speed.

A year of activity

The first video shows a day by day animation of activity in the city. The lines show the road or cycle ways in which activity took place on that day. Thicker, brighter lines are busier.

June 11th 2015 was a big day for cycling in Bath. The Pearl Izumi Tour Series finished in Bath and there were some support races during the day.

Here’s a short video that animates the data for just that day:

Were there other mass cycling events in 2015 which we should visualise?

One aspect of the data that we’ve not explored so far are the wait times associated with each junction. The following video shows another play through of the whole dataset, but focuses purely on junctions.

Each dot is sized based on the number of Strava users passing through that junction. The colour coding indicates the average wait time. Green is the shortest and red the longest.

Activity by day of the week

The final video, which is also set to music also shows a heatmap of activity. However rather than playing through the dataset day by day, it looks at activities by time of day. This one really highlights the rhythm of life in the city.

This completes our initial pass through the Strava Metro data. As this point we’d like to hear further from the local community.

What conclusions do you think we could draw from the visualisations so far? Let’s discuss the findings.

Are there questions you’d like to ask of the data? What else could we investigate in the data?

Let us know what you think!